Discover where to find the most authentic flamenco performances, tastiest free tapas, and alternative hotspots in one of Spain’s largest university cities.

Rows of plastic bags packed with black, cardamom-spiced tea leaves sit on small tables next to ornately carved brass hookah pipes. An older couple, chattering away in a foreign tongue, maneuvers their way through the crowd to pick up freshly cut hunks of Halal meat from a burly butcher.

But this isn’t a bustling street bazaar in the middle of Morocco. 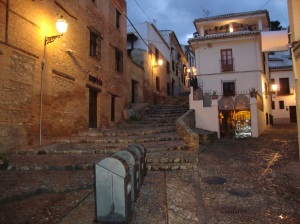 It’s the Albaicin district of Granada, the capital of the province of Granada in Spain’s southern Andalusia region—and it’s the only part of the city’s ancient Moorish neighborhoods to survive torching during the Catholic Reconquest that ended in 1492.

Granada has had a long, violent history of power struggles between the Catholics and Islamic Moors. Situated at the foothills below the Sierra Nevada Mountains, and just one hour away from the Mediterranean coast, the city was the last Muslim settlement in Iberia to be taken over by the Catholic monarchs.

Since then, because of the prestigious University of Granada, the city has grown into a vibrant, multicultural university town—of the city’s 270,000 inhabitants, over 80,000 are university students.

Today, the biggest struggles in the city seem to be trying to decide where to enjoy the tastiest tapas, or which club is best to catch a truly authentic flamenco performance.

The Real Flamenco
Although flamenco is often associated with the culture of the entire country Spain, it’s actually only native to the Andalusia region. Like the city of Granada itself, with the combination of Moorish and Catholic architecture, flamenco music and dancing is a passionate combination of gypsy and Spanish rhythms.

There’s no shortage of tablaos (flamenco performances) to enjoy in Granada, and the tourist office (Junta de Andalucia/2 C. Santa Ana) always provides a list of nightly shows. But many of these shows are overpriced and cater to throngs of tourists, with a feeling of being sold an image of Spanish culture rather than experiencing the real thing.

For a more authentic flamenco experience, and one that’s much friendlier on the wallet (there’s no entrance fee), Café Eshavira (2 C. Postigo de la Cuna) is an intimate bar that plays host to flamenco and jazz music. Hidden in an alleyway between Calle Elvira and Gran Via in the labyrinth of the Albaicin district, Café Eshavira’s clientele is a mixture of young Spanish students, gitanos (gypsies), dancers, and musicians.

Pushing through the heavy carved wooden door of Café Eshavira feels like walking into a different universe–an intimate, dimly lit, smoky atmosphere that feels eons away from the hustle and bustle of everyday life. According to Gisela Remola, a Spanish university student, “After the professional flamenco dancers and musicians are done performing for the tourists [at other places in Granada], they come here to drink, unwind, and perform with their peers. They come here because they love flamenco and want to preserve the tradition, and not because they’re being paid to play.”

Impromptu Flamenco
Walking down a short flight of stairs reveals a small, cavernous-like room with chairs and candle-lit tables dotted in front of a stage. Choosing to sit amongst the crowd rather than playing onstage, a musician—cigarette dangling loosely between his lips–starts flawlessly playing intricate flamenco rhythms on a classical guitar.

While his callused fingers dance and fly across the steel strings, an older gypsy man starts a cante flamenco gitano (gypsy song)—lengthening every syllable and varying his pitch to enhance the emotional depth of the lyrics.

A young woman stands up and starts dancing an improvised flamenco puro (pure flamenco), twisting her arms around like a charmed snake and stomping her heels into the ground while her friends shout out encouraging cries of, “Ole!”

Enjoying the Alhambra
Flamenco isn’t the only part of Andalusian culture being preserved in Granada. 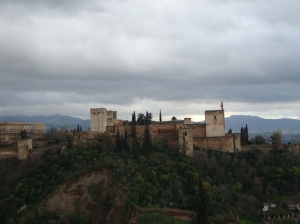 Look up from almost any location in the city, and it’s hard to ignore the red, blocky Alhambra palace and fortress looming on top of the al-Sabika hill, with the snow-capped Sierra Nevada mountains as a backdrop.

Constructed during the 14th century by Moorish rulers, the Alhambra—which translates as “red fortress”–is a UNESCO World Heritage Site. Limited to just 7,700 visitors per day, it’s best to purchase tickets at least one day in advance (13 euros/www.alhambra-tickets.es) Should tickets to the Alhambra sell out, there are also garden-only tickets (7 euros) that allow an unlimited number of daily visitors and give access to El Generalife, which served as a summer palace for Granada’s former royals.

With sunlight filtering through towering cypress trees, the calming sound of trickling fountains, and the sweet scent of honeysuckle blossoms in the air, it’s easy to imagine what it was like

to live as a royal in the middle of the 14th century.

To enjoy a free but more distant view of the Alhambra, follow the steep, winding path alongside the Darro River to the Mirador de San Nicolas. Here, tourists and locals alike—including Granada’s hippie population, known to locals as perras flautas (dog flutes) due to their affinity for playing wooden flutes and owning dogs—sit side by side to contemplate the infamous saying: “Si mueres sin ver la Alhambra, no has vivido” (“If you die without seeing the Alhambra, you have not lived.”)

Just down the hill, an impressive view of the Alhambra can also be seen from the rooftop bar of Funky Backpacker’s Hostel (15-17 Conde de las Infantas/mixed dorms starting from 15 euros per person, per night).

Oasis Backpacker’s Hostel (3 Placeta Correo Viejo/mixed dorms starting from 15 euros per person, per night) also has a rooftop terrace with views of the Alhambra and the Albaicin, and its price tag includes a free welcome drink—mirroring the unofficial granadino tradition of ‘when alcohol is involved, free things will come your way!’

Free Tapas
Granada is one of the few cities left in Spain that still upholds the tradition of serving free tapas alongside drinks. Many of the city’s tapas bars observe a ‘you’ll eat what we feel like serving’ policy, but Cacao’s (12 Solarillo de Gracia) offers a wide range of typical Andalucian tapas to choose from, including albondigas (meatballs in a spicy tomato sauce) and salmorejo (a chilled, creamy tomato soup topped with chopped Serrano ham and hard-boiled eggs).

Black sculptures of branches and flowers against ceramic mosaic walls in shades of white, pink, and purple—alongside an ambient electronic soundtrack—make Cacao’s a hip and funky alternative bar to enjoy glass after glass of tinto de verano (red wine with lemonade).

Semana Santa
As nighttime falls, the city starts to truly come to life. Students, locals, and tourists pour in and out of tapas bars, clubs, and cafes; ready to take advantage of Granada’s nightlife until long after the sun rises.

Even religion has a place in this setting—Semana Santa (Holy Week, leading up to Easter) processions are weaving a path through the city well after midnight, with members of different brotherhoods struggling to carry massive, gold-leafed floats of the Virgin Mary on their shoulders, down the pepita (sunflower seed) littered streets. 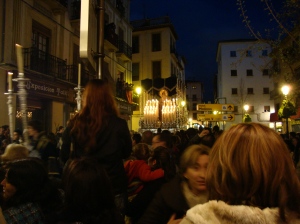 Drunken revelers stumble out of an Irish pub, and a few lines from a song by The Doors escapes along with them. Jim Morrison’s voice belting out “come on baby, light my fire/try to set the night on fire” is an oddly appropriate soundtrack for the candlelit procession, and symbolic of what Granada represents today—a city that simultaneously thrives on preserving its rich history, and yet openly embraces an amalgamation of different cultures and new traditions.

*How To Get There: Flights from London Stansted to Granada Airport, located 17 km outside of the city center, start from 19 GBP one way, not inclusive of taxes. Autocares J. Gonzalez (www.autocaresjosegonzalez.com) operates a bus connection from Arrivals to the city center for 3 euros, and the trip takes 40 minutes. Taxis are also available, taking 20 minutes to the city center and starting from 20 euros.